Martin runs the trial in memory of his late father, Mike who was also a GRA member and author of the excellent series “Mike & the Mechanics” in Leading Link, which dealt with getting the best from the Villiers engine.

Anyway, back to the trial. There were several GRA members in the entry including Ian Thompson, Bob Bartholomew, Dick Faggetter, son Ian and myself. All were Greeves mounted except for Ian who bravely campaigned my old Armstrong CM250, bought many years ago for my kids to ride and 25 years later that is happening! We began with a riders’ briefing and the starting arrangement was a “bomb-burst” to whichever section you fancied starting at. Dick shot off from the start and Ian and I didn’t see him again until later in the day, having a dismal ride. Poor old Dick was having my sort of normal luck with daft 5s due to the engine stalling and various other mishaps – I know the feeling only too well! 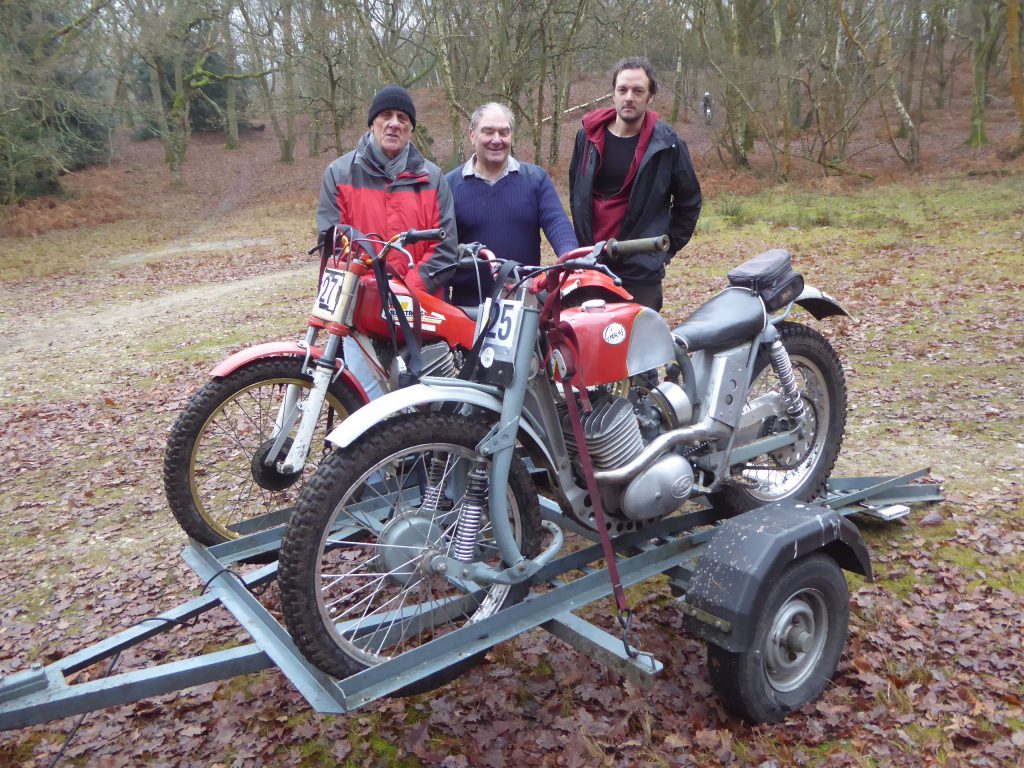 The Gang of 3! L to R, Committee Member Jack Chalk, Dick and Ian

Ian and I trundled round the sections without too much trouble until we came to the dreaded section 3 (or was it 4?) which involved a turn on a steep camber around a tree and back down again, something I hate. I did eventually get it right but before then, my foot slipped off the brake pedal going back down and I stalled as I sought to regain control. The next time at that section, before I got to the begins card, I tried a novel approach, got it wrong and sailed backwards down the hill painfully into a holly bush, having to be extracted by Ian. The next section was equally tricky, involving a tight turn bordered by saplings so that it had to be judged correctly. These two seemed to be Mike and Jeff’s mark-takers as the rest of the sections were straightforward although it was possible to lose the odd mark here and there.

I seem to have at last persuaded Ian not to ride the sections so fast as this year, he rode really well to lose not a single 5, he’ll soon be beating me at this rate! We had no machine troubles at all which is really the thing that makes the day. All in all, it proved to be an excellent event as ever. The sections were straightforward and aimed at our sort of machine and were a pleasure to ride.