A brief history of Greeves

Greeves motorcycles were produced in a purpose-built factory at Thundersley in Essex from 1953 to 1976. Initially the bikes were an offshoot of the Invacar company which produced invalid cars and needed to diversify its products, and the founder of the concern was O.B. (Bert) Greeves MBE.

The competition bias of the company was very strong, with more than half the total production being machines for competition in motocross, trials or road racing. Their roadsters were acknowledged as being considerably superior in construction and handling to their rivals in the lightweight marker of the time. 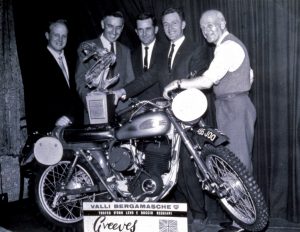 Greeves had many successes in competitions at home and abroad

The bikes were exclusively two-stroke powered, using proprietary engines from Villiers and British Anzani initially and always for the roadsters, but by 1964 they had developed their own engine for competition use, at first with Albion gearboxes, eventually with their own. The distinctive features of most Greeves machines are the alloy beam frame front member and the rubber-in-torsion suspended leading link fork, although later machines (Griffon, Pathfinder) dispensed with the alloy beam, and the distinctive fork was modified to use steel springs and eventually superseded by telescopics.

For the few short years of their heydar Greeves were remarkably successful in competition, with wins in the European Motocross Championship, the Manx Grand Prix, the European Trials Championship and the Scottish Six Days Trial, and with Gold medals in the ISDT and ACU 250cc Road Race and Motocross Stars. Who can forget the Saturday afternoon televised scrambles when Dave Bickers and his teammates fought it out with the works riders from BSA and Matchless?

The other great Greeves success was in exports; at the peak of production the majority of output was sold abroad, primarily in the United States, at a time when the British balance of payments deficit needed all the help it could get. Greeves were so successful in the USA that they can reasonably be credited with awakening the off-road biking scene there, and with the invention, as early as the mid-sixties, of the trail bike with their road legal off-roader, the Ranger.

Although Greeves have always been contenders in classic scrambling, in the last couple of years the Pre-65 Motocross Club has been running a successful Greeves-only championship series with handicapping arrangements to allow Hawkstones from the late fifties to compete with Challengers from the sixties and Griffons from the seventies. Their meetings really recapture the spirit and atmosphere of 1960s scrambles. Greeves Silverstones are active and competitive in the 250 singles class at Classic Racing Motorcycle Club meetings, they are consistently first British bike home in the Lightweight Classic Manx Grand Prix, and one took first place in the 250 racing class of the 2002 Classic Bike Spring Championships.

Greeves Scottish and Anglian trials models are ever-present in pre-65 trials, and recently, indeed, a new Greeves Motorcylces Company has started up to manufacture an improved version of the Anglian, which was arguably the best of the Greeves trials bikes. They are based in Chelmsford, so the Essex connection lives on, and they can supply a good range of spares and improvements on the original machines. Villiers engine spares are readily obtainable from a number of helpful and efficient suppliers in this country, and may parts for the Greeves competition engines are available both in the UK and the USA.