This story starts with Dick Faggetter and I attending the Stoneleigh Dirt Bike Show back in October. We bumped into Alan Wright who explained that he would be helping Morton’s with Telford more than usually this year. He would like to feature a display of Greeves scrambles machines only with one from every year of manufacture and would we be able to organise this? With typical GRA optimism, we said “of course Alan, no problem”!

Now the GRA first became involved in “Wrighty’s Show” back in the Malvern days when Dave Bradley and the late Tim Griffin entered and others of us went along too. It then became a mainstream event for the Club and I have always regarded it as “Dave’s Show”. As a result, I immediately lumbered him with finding the bikes! Dave leapt at this opportunity and in no time at all, Dave had the task well under way. This was an Impressive achievement because Dave has recently suffered some serious eye problems which I am very glad to report, he is now recovering from.

Many phone calls and an awful lot of work later and Dave had 21 machines lined up with, indeed, one example from virtually all years of manufacture. Wrighty was naturally delighted and we were given a large area in the foyer in which to put on our display. We were all a bit uncertain how good a spot this would be and were rather concerned that we would not be in the main halls.

The weekend duly arrived and we were definitely not impressed with our pitch. Although we were situated between the visitor’s entrance and the halls we thought the crowd would just walk straight past. Come opening time on the first day and we were right. The gates opened and they were off, straight past us and off to the jumble. The Grand National had nothing on this lot!

However, as the day wore on, more and more visitors came back to see us and we had some very interesting visitors. From that point on, the stand was positively heaving and we decided after all that despite our initial reservations, we had got a good spot after all. Pete Smith was very busy selling regalia and signing up new members, so much so, that he went home with over Â£400 in sales and memberships!

To cap it all, we won the “Best Club Stand Award” and Ian Hodge won “Best Scrambles Bike in Show” with his superb Challenger. This event goes to prove how buoyant the classic off-road scene remains, not to mention how much interest there is in Greeves with the serious enthusiast signing up for GRA membership on the spot. At the end of it all, we very pleased and, I think, surprised at how well things had turned out, especially in view of our earlier misgivings.

The real heroes of the event were Dave Bradley for organising the machines so well and Pete Smith, our regalia man who did such a fine job of manning the shop – many thanks both!. Thanks are also due to all those who brought along their bikes to display as without you, we wouldn’t have had a prize-winning stand! 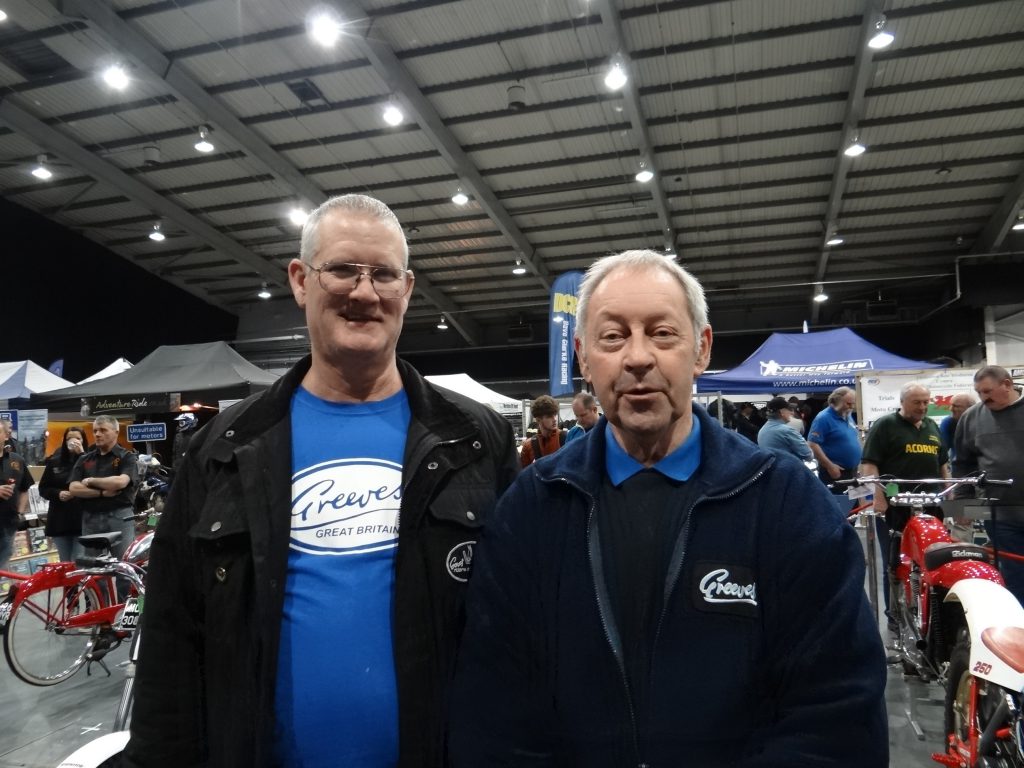 Our Two Prizewinners, Ian (L) and Dave (is that a smile or wind!)