Battlesbridge – The show that almost never was!

Because of the above reasons, we agreed at the previous committee meeting that we would not attend the Show this year. However, fate was to intervene in the form of an omission on the part of the organisers plus Dave Harper. I received a phone call from dave to say firstly that the organised had forgotten to remove references to ‘Greeves’ from the advertising and would really like some form of GRA presence. Secondly, a friend of Dave’s had stepped in and would run a grasstrack demo so that bikes could be ridden.

Plan B activated – we would or rather I plus son Ian would be there plus my trusty Hawkstone that we both could ride. We also took the GRA sail flag, banners and ‘roving regalia’ box. We duly arrived in what turned out to be very sunny Essex. Having unloaded, we parted with a very reasonable Â£5 each to ride and signed on. Having set up the flags and banner and put the regalia on a table under a gazebo kindly provided by Dave, including a lady to look after it, the temptations of the autojumble took over. Luckily, there was very little by way of temptation so we girded our loins and prepared to ‘demo’. As it turned out, the straightforward oval proved very enjoyable to ride. Sessions were split between grass bike (of which quite a few were Greeves-powered), scramblers (quite a few Greeves) and the Cambridge Moped Grass Club. The latter were not on mopeds but 140cc pit bikes and they seemed to have quite a bit of fun, not to mention their spirited riding style! 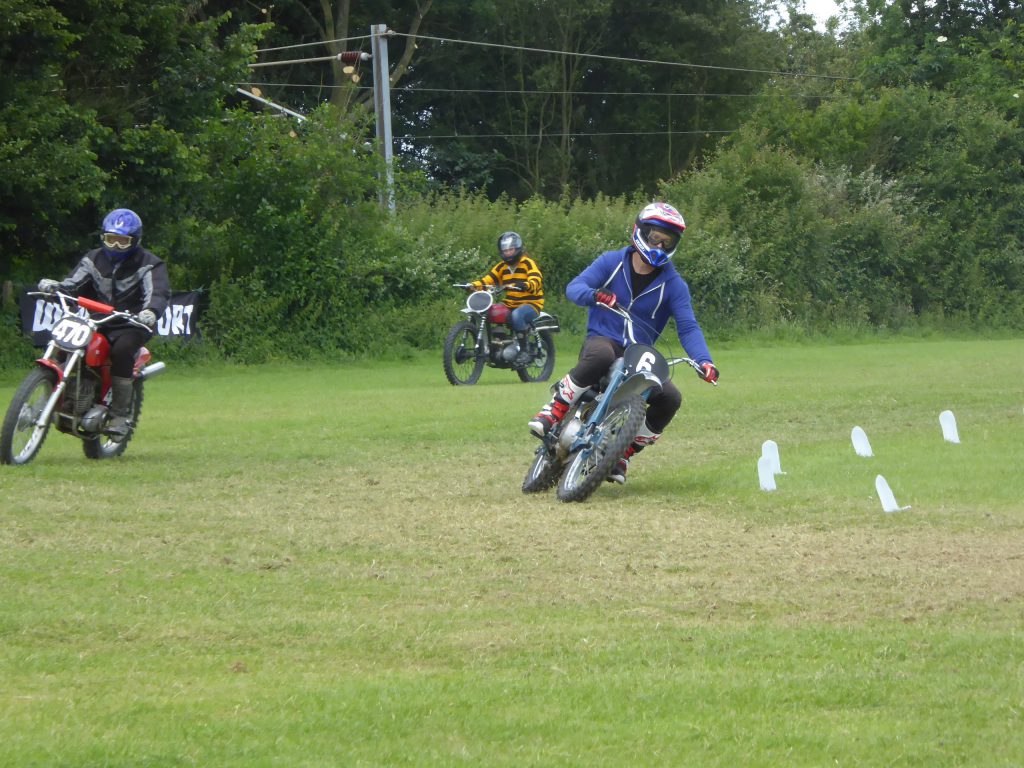 Ian enjoys a spin on the Hawkstone (without crashing!)

The show itself was very busy with a lot of bikes on show, many of them very interesting specials and well-preserved examples from the past. The weather made all the difference and compared to last year, contributed to the crowds present.

At the end of the day, we sold a bit of regalia and chatted to some very interesting people including a former factory worker who had some amusing tales. Dave felt that the show turned out to be probably the best ever and we were inclined to agree. There were no accidents in the demo although my son managed to hit the back of a Francis Barnet and fall off (apparently due to his braking finger having been bitten by his brother’s dog the night before – must remember that one!). We provided a GRA presence and helped to keep the organisers happy and quite a few people were glad to see the GRA flag waving!